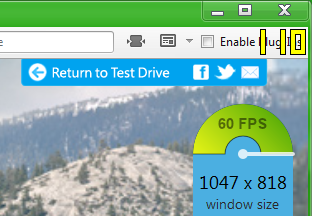 Many programs and games have 60FPS or 60Hz limits. These should be lifted to benefit and promote 120Hz monitors.

Show a max FPS of 60, but are not limited to more as far as I can tell. But the max displayed should be 120FPS, as not only games benefit greatly from 120Hz+FPS.

Most UE3 games have framerate smoothing enabled. This also implements a frame rate limit. It can usually be configured via Engine.ini files:

These are lines from UT3’s UTEngine.ini file. Arkham Asylum should have something similar.

Recent Unreal Engine games have a 60 FPS limiter, and the trick is to find the UEngine.ini file and set alll instances to bSmoothFrameRate=False. In Bulletstorm the ini file is encrypted so you need this first, then edit StormEngine.ini in C:\Users\username\Documents\My Games\BulletStorm\StormGame\Config

Does not support higher than 60Hz refresh rate due to DirectX 10. I use nVidia Control Panel to force the refresh rate to max, which ends up as 120Hz.

Does not support higher than 60Hz refresh rate due to DirectX 10. nVidia Control Panel does not  provide a refresh rate override.

This games engine is tied to the FPS, so the faster FPS you have the faster the game runs. It makes you run faster, and drive faster and that makes it harder to drive well and attain achievements.

Update! This has been fixed in a patch.

Seems to generally have problems with the 60Hz limit. Doesn’t anyone at Microsoft that develops or tests DirectX have a monitor that can run at 120Hz? That’s no good!

Update: Fixed in a patch.